Keith came to Orangetheory (OT) knowing what HIIT (High Intensity Interval Training) was all about. He consistently worked out three to five times weekly at various gyms for nearly 10 years and discovered the benefits of HIIT. Keith joined a small group, which did HIIT and he noticed the dramatic changes in mind and body.

After the training with the group ended, he researched online what he could do to continue the same type of training. All roads led to Orangetheory.

“It is clear to me that OTF helped me get through that part of my life in the best way possible, with friends, coaches, and a kick a** workout every time.”

Keith took his first class with Coach Conner in July of 2018. “My first class was great – hard, but I pushed myself. Coach Conner had to tell me to slow down because I was in the red and that my heart rate was far too high. I loved the first class and the challenge of it,” he said. Keith described the coaches’ instruction, attitude, and encouragement as “over the top.”

As an avid fan of OT, he joined the 250 Club within 14 months averaging five classes per week. Keith has a busy schedule running three companies and has duties as the chair of the board for the Beaverton Area Chamber of Commerce. The indispensable regular workouts provide him with energy and a positive sense of self, which are needed for all of his responsibilities.

Prior to Orangetheory, Keith developed cancer in 2017. After three months of healing, his motivation to keep his health at an optimal level was at an all time high. Training often at OT Orenco Station has helped him reach his goal of having the kind of body and health he wanted. Sadly, his wife also became very sick that year (passing away in 2019). “It is clear to me that OTF helped me get through that part of my life in the best way possible, with friends, coaches, and a kick a** workout every time,” said Keith.

“I am in the best shape of my life, lowest weight, lowest body fat in more than 30 years and I’ll be 60 years old this April.”

When he started OT, Keith had goals of working out three or four times a week and incorporating a clean diet. He said, “I make and eat good clean food most of the time for lunches and I have a yummy protein shake for breakfasts. I knew my body would respond if I stayed on this path and it has worked for me.” Keith’s goals now are to maintain this routine by working out every-other-day and to run some 5K races with some great OT friends in the future. 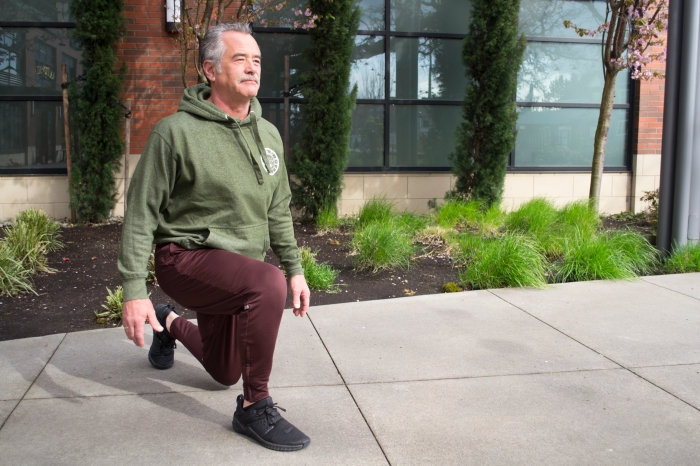 He reached a major milestone in his health when he recently had a full-body checkup. All the tests results came back good. “I am in the best shape of my life, lowest weight, lowest body fat in more than 30 years and I’ll be 60 years old this April,” said Keith.

Orangetheory offers so many different reasons why one would love the classes. Keith loves taking ESP (Endurance, Strength, Power) classes but enjoys them all because they’re never the same. The classes offered at Orenco Station give him a wide variety of times to attend with his hectic schedule. In addition, the classes give him energy throughout the day and leave him sleeping like a baby at night.

Although there are so many benefits from taking classes at Orangetheory, it’s the community he enjoys most. The unexpected benefits Keith has experienced are creating lifelong friends, meeting other business owners, and receiving referrals due to his association with OT.

“We all are there for the same thing – our health. The kind of culture when a group like this gets together is so special – encouraging, uplifting and exhilarating. The coaches are ‘A plus’ individuals and top-notch at what they do. The entire OTF experience wouldn’t be what it is if the staff wasn’t supporting all of us. And besides having a sparkling facility, the friendly greetings and helpful attitude from the second one walks through the door makes the place absolutely shine.”

Keith loves the entire package that is Orangetheory Orenco Station. The community is unlike any he has experienced within a fitness studio culture. The relationships made bring about a camaraderie shared both inside and outside of the studio. The positive attitude of everyone – especially the coaches’ encouragement – is invaluable as that motivation moves into everyone’s daily work and play lives.

He has never looked or felt this good and OT helps him be the best version of himself daily. Keep Burning Keith! A person can tell you many things. Sometimes you forget what they say going through one ear and out the other. However, there are times when a person will tell you something where it simply sticks and resonates with you.

In 2014, Monica’s oncologist gave her words of advice, which were so profound that she shares them with anyone who asks her. After enduring four rounds of chemotherapy, followed by six weeks of daily radiation, she wanted to take control of the cancer she had. Her doctor told her, “…keep up your healthy nutrition routine…work out as hard as you can as often you can and then do more…get seven to eight hours of sound sleep every night.”

When she completed all of her treatments in 2015, Monica asked her doctor once again what she could do to remain healthy and keep the cancer away. He asked her, “Do you remember what I told you when you started? Do those same three things forever!” Since then, Monica continued to follow his advice. Determined not to have cancer take control of her life, Monica took control of it. She began by walking the Camino, a 260 mile trek from Lyon, France to Santiago, Spain with her daughter Kelsey.

“It’s the energy of walking into a place that sparkles, welcomes, and hugs you even when you’re a ‘sweat-ball.’ It’s your new friends who text you when you’re gone from the studio for a while and they want to make sure every thing is OK.”

As she went through her treatment, she remained diligent working out three to four times a week. She tried various types of workouts ranging from Zumba to swinging kettlebells, but she couldn’t find what she wanted the most from those workouts – a community. That’s when she discovered that an Orangetheory (OT) location was opening at Orenco Station only five minutes away from her front door.

Monica, a little gun-shy, signed up for a membership during pre-sales. Once Orangetheory opened its doors in December of 2016, she showed up for the two-week trial period.  She said, “The first class was terrifying! I remember walking into the studio and standing, frozen, staring at the machines, TV monitors, and the orange of it all!” She had no idea of what she got herself into.

She gave herself the grace and permission to, from the start, quit if she couldn’t handle OT. Monica attended classes two to three times a week and eventually went six to seven times a week embracing the culture. Monica said, “I was hooked. Addicted. Obsessed. In Love. I found my groove – my thing.” Everyone she talks to about OT, she swears, thinks she has joined a cult.

“Just start. Just start and do not quit. Eat healthy. Sleep soundly. And, work out as hard as you can, as often as you can…and then do more.”

The community is the number one reason, which provides Monica her mojo, daily joy and her happy place. She has made so many friends and works out with people who she has come to love. Monica said, “It’s the energy of walking into a place that sparkles, welcomes, and hugs you even when you’re a ‘sweat-ball.’ It’s your new friends who text you when you’re gone from the studio for a while and they want to make sure every thing is OK.” She also landed a new career working with 401(k) accounts from her friend, Milauana, who she befriended by attending classes at the studio. 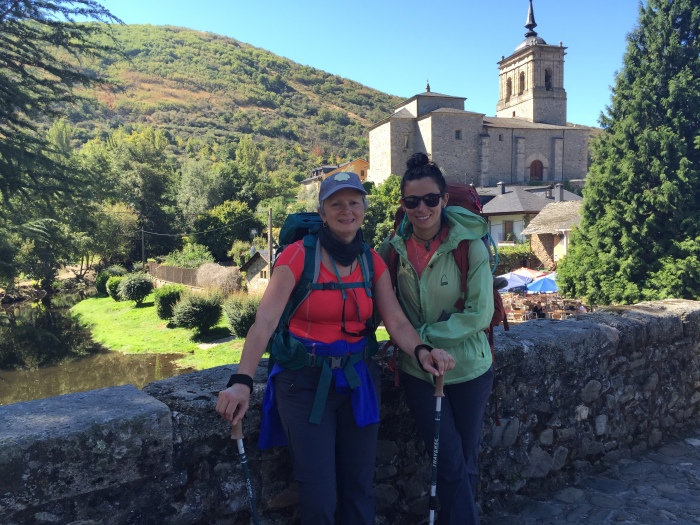 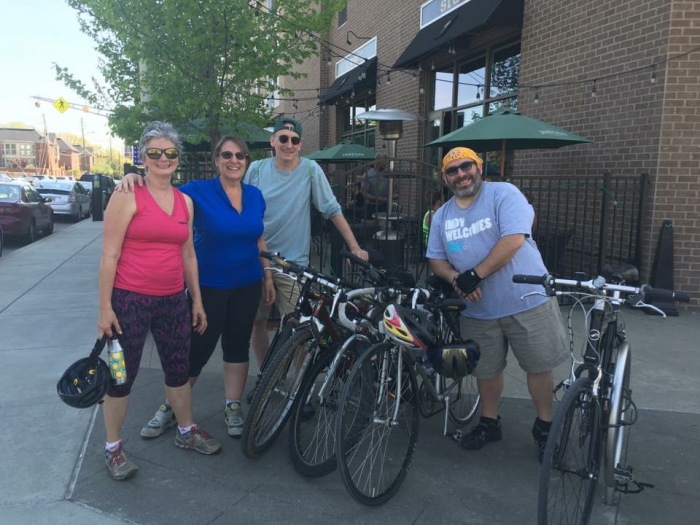 It didn’t take long for her to realize that OT wasn’t all about the equipment and tech, but more about the coaches and how they coached her every step of the way since day one. “They were patient and yet they pushed me. They watched me, and they coached me. I have learned how to row, how to run, how to lift correctly, and how to modify when I need to,” said Monica. She has observed each and every one of the coaches and seen how magnificently they’ve grown individually. Each coach has blossomed into a leader, mentor and a good friend to all – this is why she doesn’t quit.

Monica appreciates how the coaches don’t quit. The coaches show up for special workshops occasionally on Sundays after normal hours of operation. They take the time between classes giving advice and tips to help members with any problems or questions. Coaches provide a contagious energy beginning with high-fives at the start of class to celebrating milestones of any member during and after class.

Since she has joined the Orangetheory family at Orenco Station, Monica has seen real results in many ways. She feels great loaded with vast amounts of energy especially after an early morning strength-day workout. The euphoria from finishing a class empowers her to tackle the day with confidence and power.

She definitely feels the strength she has gained in her muscles in the past two years. Monica lifts heavier now because the coaches know she can and encourages her to do so. She loves how she doesn’t bat an eyelash now when she adds more weight or making the TRX strap exercises a little more challenging.

Monica’s healthy habits and diligence has rubbed off on her kids and they’ve followed suit. Her daughter Kelsey wants to open an Orangetheory in Vienna, Austria so she can take classes every day. She and Kelsey plan to walk the next Camino – the Portuguese Camino – in 2020. Her sons also send photos of healthy meal prepped foods for the week too.

When people ask her how she stays in shape and how she has so much energy, she tells them, “Just start. Just start and do not quit. Eat healthy. Sleep soundly. And, work out as hard as you can, as often as you can…and then do more.” This advice stuck with Monica and has worked for her – it can work for you too.